We Light Up The World: National Youth Day

In honor of National Youth Day we got five of our young adults with deafblindness to talk about themselves, life and pressing on with their rights. But first, what is National Youth Day and why do we celebrate it? National Youth Day is celebrated on the 12th of January- Swami Vivekanand’s birthday. It has been so every year since 1984, when the Government of India decided to celebrate the great personality who was a great inspiration for many young minds in India. Though it is not a public holiday, it is a symbolic day for the youth of the country to become aware of the role they play for the betterment of the society and by extension the world.

Holding on to the theme of International Day of Persons with Disabilities 2020 “Building Back Better: Toward a disability-inclusive, accessible and sustainable post-Covid – 19 world” we gathered five young adults with deafblindness to talk about themselves and the importance to recognize and exercise their rights.

Getting on with the theme of the day we gathered five adults with deafblindness. They are perfect examples of self-determination and had come from different parts of India to share their stories. Ms Sishna Anand from Kerala, Mr Guman Singh from Sikkim, Ms Asha Patwal from Uttarakhand, Ms Pushpa Kadayat from Delhi and Ms Shrutilata Singh from Gujarat. As the panelists had varying degrees of deafblindness, their modes of communication were different from each other ranging from tactile sign language to support in hearing or seeing. 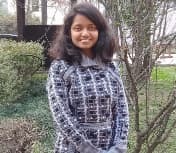 She asserted that it is their right to get equal opportunities in education and employment and be supported wherever required. Shruti even focused on self-advocacy - that is to stand up for their rights and make their own decisions for a better life. One such forum for young adults with deafblindness to participate is a networking group named Udaan. Shruti even said that with their help she has become more outspoken and is more confident in expressing her views.

On being asked about her experience and role as an Advocacy Officer at Sense, Shruti said that she is grateful for the support that she has received. She said, “After joining, I have updated myself on the Rights of the People with Disabilities. I am connecting with other people with disabilities and discussing their concerns, issues and opportunities. I am also learning to advocate for the community on various platforms.”

Ms Sishna Anand is a person with total deafblindness and she joined the session with her father who communicates with her through tactile sign language. She finished her education from the Hellen Keller Institute, Mumbai where she learnt mediums to stay connected with those around her. She is a working professional now and has been honoured with quite a few awards such as the Clinic’s award. Sishna makes paper bags, paper pens, umbrellas and mats in her free time. She is a self-advocate and an active participant in the network and advocacy meetings for young deafblind. Sishna is currently preparing for her State Service Commission (SSC) at home and hopes to pass it flying colours.

Mr Guman Singh is pursuing his higher studies (MA) and is an active participant in the meetings conducted by Sense India. Recently, he participated at the State Advocacy Meeting of Sikkim where he put forward his needs and rights. He joined the session with our special educator, Mr Vinay Singh. Guman realised about his condition after he joined school and was bullied by his classmates. He was quite a shy child. He became really interested in sports, however he was not encouraged by his teachers so he couldn’t play in school. So, he started focusing on his education. In class six, he came to know about Terry Fox who won a marathon despite having cancer in his leg. This determination motivated him to do better in studies. “My parents were not keen on me to continue my studies and wanted me to start earning, but I took a stand for myself and continued studying.” In College, he proved himself by securing well in Physical Education. Guman has received a scholarship for his education. 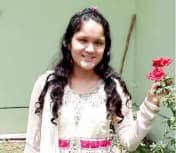 Ms Asha Patwal is sixteen years old and is studying in standard 10th. She is a young and energetic participant of the meetings by Sense India. She joined the session with her teacher Ms Taru and her guide and mentor Ms Sumanna Samuel, who has been a significant support in Asha’s progress. Asha was born with a cataract that was not treated in her childhood. She was supported by Ms Sumanna who took her to Delhi where she got her eyes and ears checked and later joined the Bajaj Institute of learning. Not only her, but Ms Sumanna learned Indian Sign Language (ISL) too. In 2014, Asha went to the US young achievers training camp for the deaf. She said, “Self-advocacy means studying for oneself.” This year, Asha participated and won the video competition of the UN World Data Forum and advocated that people with deafblindness should be included in the Census. She said, “Though we can’t see or hear, we have to still stand up for our rights and are included in the society!” Asha has been able to come this far because of the constant encouragement given by her teachers. Asha wants to light a spark so that no one can ignore the deafblind in the world and they get equal rights like any other person. She wants to keep moving forward and support children like her to achieve their dreams.

Ms Pushpa is a para-athlete and has won medals at the Special Olympics in the USA. She joined the session with her sister Ms Rupa. She was recently interviewed by CNN on her achievements. Pushpa was born in Nepal and brought up in Delhi and is currently studying at Delhi University. While studying in school, she didn’t receive the support she needed and felt isolated. Like a ray of hope, she got support from one of her teachers who encouraged her to take part in school. Pushpa started taking part in shot-put and weight lifting where she won and got an opportunity to participate on an international platform. After this recognition, she started getting support from her family, friends and teachers.

This support pushed Pushpa to believe that she can also pursue her dreams and be a role model for the world. She worked very hard for two years in weightlifting and represented India in the USA and won 4 medals. After meeting other children with deafblindness through Sense India, Pushpa realised that she is not alone and there many people like her.

We asked all of them about the role of family in facilitating social inclusion in day to day life. Asha shared that though her family supports her, they do not know sign language. She says, “As I am duo lingo deaf, I can speak some words and with the help of my sister I am able to communicate with them to some extent. However, as they speak in a different language, I am not able to understand it at all.” She wants her family members to learn the ISL so that she is able to communicate with them and feel included in the family. Asha said that her mother doesn’t let her go out as she has deafblindness and has to be at home with her grandmother. Asha said that she wants to go out too like any other person and socialise. Guman shared that in his childhood, sometimes he would not get the desired support from his parents. However, now seeing his abilities, they support him. Guman said, “Children need the care of their parents when they are young.” Shruti said that, “Parent’s support and encouragement is essential to nurture the child as well for the communities to support them. Social Inclusion helps people with disabilities to be a part of the mainstream.” Pushpa shared, “In my childhood, I was not supported by my family as they couldn’t understand me, but now it is better and they encourage me often. I am grateful to my mother for encouraging me to take part in sports.”

Get our news letter to stay up to date

2020 All rights reserved with Sense India